It’s not uncommon for a newspaper reporter to change beats. Covering the same exact thing, day after day, has benefits but can also be tiring. Having spent eight years at The Washington Post, I’ve seen three journalists cover the Washington Capitals beat. Rachel Alexander/Nichols did a fine job, and has moved on to much better things at ESPN. Jason La Canfora then did a good job before being promoted to cover the Redskins. Then came Tarik el Bashir, who had a much greater sense for hockey than most Post journalists (particularly the columnists). Sure, that’s not saying much considering the criticism of The Post’s hockey coverage, but Tarik has definitely improved it over the past five years.

My first encounter with Tarik was during the lockout season several years back. I ran into former Capitals captain Jeff Halpern at the now-closed Hockey Stop in Rockville. Halpern said he was going back to Europe to play for a team. I e-mailed Bill Grant, my former boss and washingtonpost.com sports editor, who e-mailed Tarik who called Jeff and then wrote an article about it. I didn’t actually meet Tarik then but when I finally met him years later in the Capitals press room, he actually remembered that little story. He also thought it was hilarious that we named our blog “Capitals Outsider” which was a play on words for his Washington Post blog, “Capitals Insider.”

Over the next couple season I got to watch Tarik work. He had the most demanding job of any journalist in the Capitals press room. He had a great sense of humor, and it was great watching him interact with the players and coaches since he knew them better than the other journalists.

So when he stepped down from his beat to focus on NASCAR, Georgetown basketball and his family, I wasn’t surprised, but I knew I had to write a tell-all tale about the dirty secrets behind his work. So I wrote “A Tribute to Tarik el-Bashir” for Capitals Outsider.

Tarik’s response: “Oh my god. Never thought I would see that. Thanks man.”

And Ted Leonsis’s response: “That is very nice of you although although early on he didn’t like the bloggers for the Caps at all:-). Ted”

Well, THAT I didn’t know. You lose, Tarik! Bloggers forever!

There was a time when my head was so entwined by the passing and failing of the Washington Capitals (also the Redskins), that it could ruin my entire day/week/month/year when a sub-par performance drained the fan in me.

Sure, after various heartbreaks you’d say you can get used to it. After this one, however, it’s not typical. This loss was something new. This was SUPPOSED to be the season. There are no excuses. Get ’em next season? How? How much better could they have done during the regular season? Were they just unlucky? Perhaps. But whatever.

I’m a Capitals fan. While I’m disappointed like everyone else, particularly considering the high expectations, I’m at the point where I can shrug this off, save up my energy over the summer and then enjoy another great regular season this coming September. Anything beyond that, no matter how high the expectations, will only be a bonus.

That’s the way I look at it now, and I feel it’s the healthiest way. 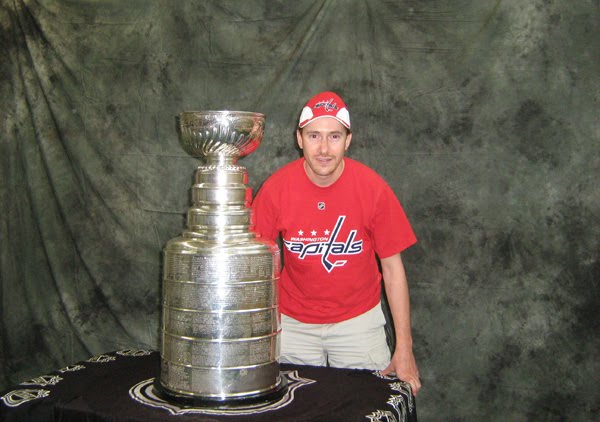 I know the Capitals haven’t won the Stanley Cup yet, but this was my chance to get my photo taken with it and I wasn’t going to miss the opportunity. Check out my article on CapitalsOutsider.

I simply don’t get it. A game is on TV, or you’re at the game, but your focus isn’t on the game exclusively, but on your computer or phone so you can see what other people have to say about the game. In-game chats are on the rise, as are Twitter tweets about the game (or any event, like the Oscars).
So what’s going on is, people’s attention isn’t focused 100% on the game – it can’t be. While the people doing this are people I know, colleagues, and former colleagues, I’ll never be on board with chatting about a game on a computer while the game is in progress.
I’ll admit that occasionally, something of significance or interest is released through these mediums. For instance, if someone notices something that few others did, telling others who may not have seen it can be informative (like if a player doesn’t return for a period due to injury, or a milestone stat is reached). But that rarely happens. Instead, the vast majority of what we get are simple comments about the game/event as it unfolds, 99% of which anyone would know if they’re focused on the TV and not  the computer!
While writing for CapitalsOutsider.com, I sorta have to do it, just in case. I need to keep an eye on what others are saying, just in case.
Now only if I can get ’em to stick to the necessary messages. But I’m one of the few making this argument so I lose.

The number of page views I get on something I write doesn’t necessarily reassure me that I did a good job (though in my world page views is really high up there), but when the owner of the Washington Capitals writes a blog post (albeit short) about something I write, right before game time, I feel I can congratulate myself.
Anyway, the article he likes is A Fan’s Guide to Attending a Capitals Game.
Update: Apparently, the Washington Post likes it to, and linked to it here.