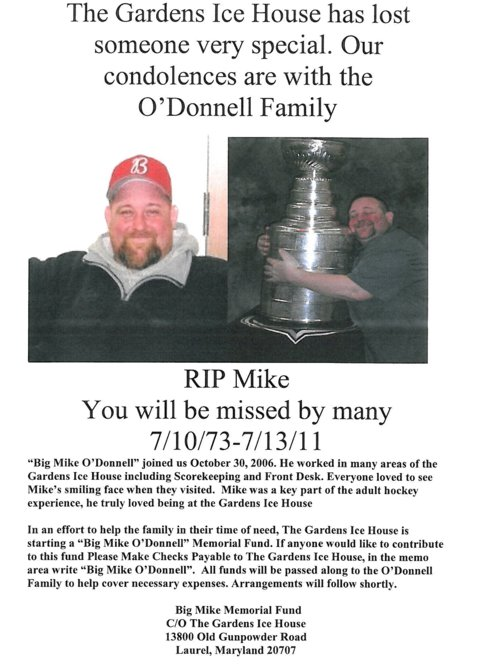 I found out last night that my friend Mike O’Donnell died the other day. I worked with him at the Gardens Ice House. It was his 38th birthday just this past weekend, and a bunch of people put messages to him on his Facebook page. It was quite a contrast to see those were followed directly by even more people shouting their final messages to him.

He was truly a good guy and someone I really considered a friend. We talked a lot, read the same books, knew a lot of the same people going back years, and enjoyed hockey. He gave me a Stephen King book, “The Dome,” which is about 1000 pages and was anxious for me to finish so we could talk about it (I regret to say that I haven’t started yet but I will soon). He’d scorekeep my games, tell me how boring they were. A few weeks ago he caught a guy lying about his identity during a game, and I came over and tossed the guy. He showed George McPhee a ballad I had written about him, then called to tell me that George liked it.

Mike kept life relatively simple. While driving him home a couple months ago, I asked him what he’s been up to. “Working and having fun,” he said. We were talking on the phone about benefits at work. I asked him if he was contributing to his 401k. He said no. Turns out, that was a good decision.

The second to last time I saw him, he got finished scorekeeping, put his backpack on, smiled and waved to me, then walked away as if he were going somewhere. For some reason, it struck me even then, subconsciously, that maybe he was. I saw him once again a few days later when he showed up for work after one of my games. Unfortunately, one of the last conversations I had in person with him was the time of his next games to scorekeep. We joked around on Facebook a couple times since when I found out that a lifelong friend of mine also knew him – from high school – and were still friends.

I’ll never forget him, and I’ll miss him. Rest in peace, Big Mike. 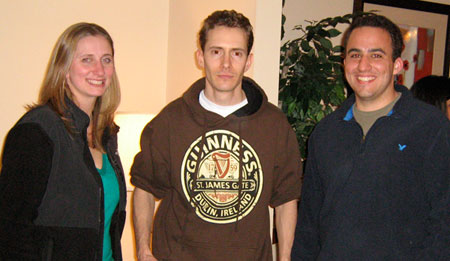 Me, with Shannon and Brent Machado in March 2008. 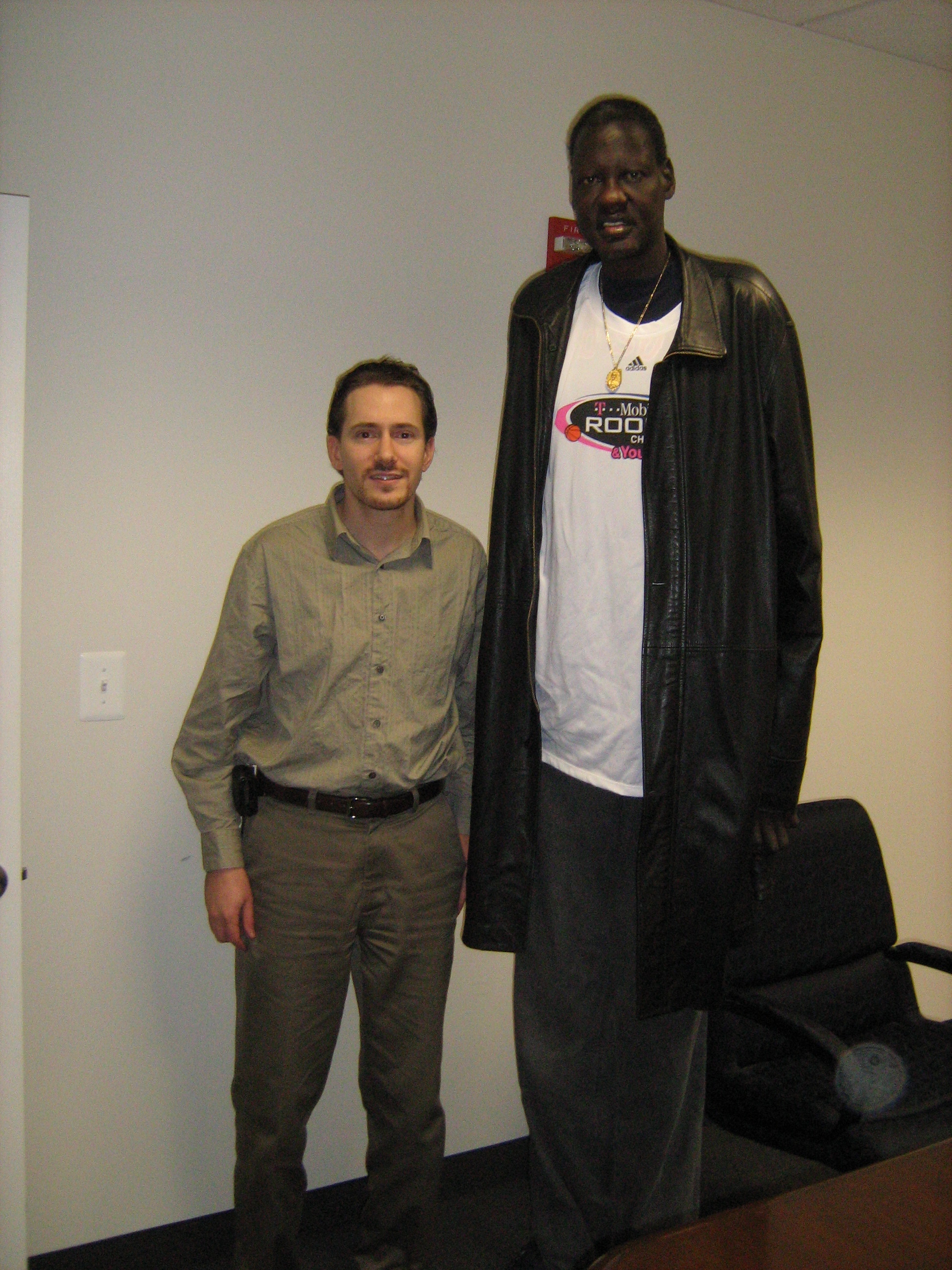 Anyone who grew up as a Washington Bullets fan in the 1980s has very few fond memories. The team was a disgrace, and to a large degree, can still be considered a disgrace. But there was one player in particular who stood out, and that was Sudanese shot-blocking specialist Manute Bol. I’m fairly certain he’s the only player in the NBA to have killed a lion with a spear.

Manute was different not just because he was so tall, but because he was so awkward. People goofed on him. So he had to learn to talk trash back. He made a fool of himself on many occasions. He once lost teeth the first time he dunked. He fought Refrigerator Perry in celebrity boxing. As a publicity stunt, he joined an ice hockey team and was also a horse jockey. He was sometimes in the news for odd reasons, such as fighting with his wife, or being stuck at an airport. Even when I met him, the conversation was awkward, and I felt as if I had to speak to him as if he were a child.

Despite all that, he was a remarkable humanitarian who helped the people of Sudan, and spent his fortune on it. My family had a life-sized poster of him in our garage, and when we were kids we measured ourselves on it.

Just like with Gary Coleman, Manute wasn’t in good shape when I met him in early 2009. We had to help him out of his chair for the photo. When I asked him Gunaxin’s Six Questions, he managed to make us laugh when he said that “Rambo” was his favorite movie.

There are moments in all of our lives when we see an opportunity, perhaps the only opportunity we’ll ever have, and we miss it for some reason. One of those moments for me was to meet Gary Coleman, the actor I grew up watching on Diff’erent Strokes. Back in April 2009, the Gunaxin crew went to New York for the Midgets vs. Mascots premier at the Tribeca Film Festival. Gary and his wife came to the pre-party. Gary had a horrible scowl on his face and looked to be in pain. His wife, Shannon, was listening to her iPod. Gary put his head on the table and didn’t talk to anyone.

I approached them. I asked Shannon if Gary was okay. She nodded and asked if I wanted my photo taken with him. Seeing him squirming on the table, I said no because he didn’t look to be in any mood or condition for a photo.

I wish I had gotten my photo taken with him but at the same time, there was no way I would’ve even suggested that in that circumstance. He didn’t attend the movie and instead flew back to Utah.

Now, he’s dead. Rest in peace, Gary. You were a true talent.

I remember where I was 20 years ago when I heard Jim Henson had passed away. I was still in middle school, only 14 years old, and I was at my Aunt’s house. I also vividly remember Sammy Davis Jr. dying on the same day, though he didn’t have anywhere close to the influence over my generation the way Henson did.

Naturally, I was upset. Henson was only 53 years old. What he accomplished, particularly with Sesame Street, is a phenomenon that will last for decades.

Considering what the Muppets have been through over the last 20 years, however, I’m not so certain they will have the lasting impact beyond these generations, though they’re really trying. Perhaps I’ll be wrong, but not since the original Muppet Show and the first three Muppet films have they really made a splash on pop culture. Getting the Webby Award for Bohemian Rhapsody is hardly a major step forward.

It makes you wonder what else Henson would have done had he lived. Certainly, the company wouldn’t have been sold to a German business a while back (though I believe the return sale proved to be money-making). Certainly Henson wouldn’t have approved of Pepe the King Prawn being added to the mix. Perhaps the Dark Crystal II would’ve already been made, as well as other imaginative movies like Labyrinth.

One thing is for sure. It’s been 20 years and I’m still mourning his loss.